The AEGIS Podcast: Interview with Sheldon Korlin: Effective Use of Commercial Insurance to Mitigate Risk 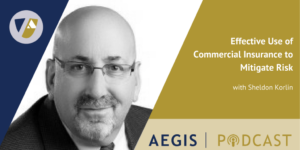 Sheldon Korlin is considered the “Grandfather of Brownfields” law in Missouri because he wrote the Missouri Abandoned Property Reuse Act in 1995 to put contaminated properties back into productive use.  He also wrote major portions of the 1997 Amendments to that law and worked with the Missouri Department of Economic Development to write the first implementing regulations that allowed the tax credits to be used to help finance the development of Brownfield Properties.

Sheldon has also worked with business owners, real estate developers, and Senators and Congressmen from both parties to help draft the original efforts at federal Brownfields legislation.  He was on the front lines of bringing change to the environmental law landscape that would help businesses and real estate developers acquire contaminated property, clean them up and put them back to productive and profitable use.

Sheldon can be reached at skorlin@aegisps.com.  His biography is here.

About the Author: Scott Levine